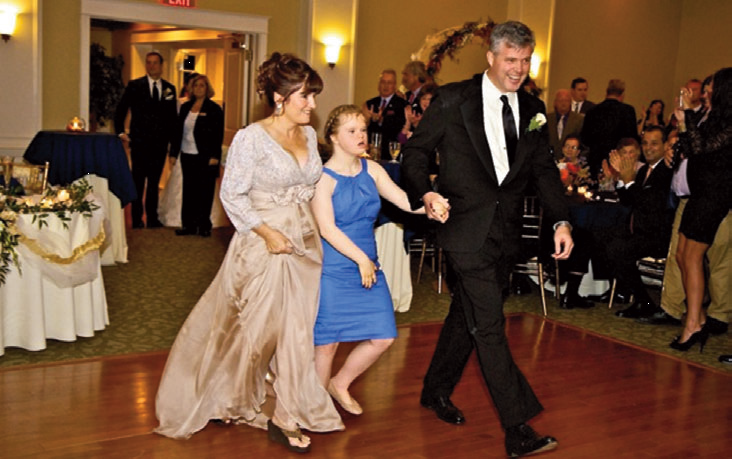 When Joe and Donna Duffey’s daughter, Laura, became engaged to be married recently, she had not given much thought as to the type of wedding she wanted. There was only one thing she was sure of: she wanted her youngster sister Maddie, who is diagnosed with autism and attends classes at Melmark, to be part of her special day. “We knew from the start that Maddie’s presence at the wedding was going to be contingent on two things: having a fairly local reception and ensuring Melmark was involved in the planning,” said Joe Duffey. The Duffey Family approached Melmark with their need for help. “The staff at Melmark immediately responded by saying they would assist us in making this goal possible,” said Donna Duffey. Melmark devised a plan that would enable Maddie to not only
join her family, but to also participate as a bridesmaid in her sister’s wedding. Over the next several months, as big sister, Laura, planned the perfect wedding day, Maddie worked just as hard with her staff to prepare for this special family celebration.

Donna says it was a day they awaited with much anticipation. “None of us knew how Maddie would handle the day, since she can become overwhelmed very easily in social settings. We didn’t know how long she’d be able to stay at the reception, but we would be happy with whatever she could do.” Maddie’s teacher, Claire, and Behavior Consultant, Amanda, brought Maddie to the Bucks Club in Jamison, Pennsylvania, where the wedding was taking place. “The
plan was for Maddie to walk down the aisle with her two brothers,” said Joe Duffey. The contingency plan, if Maddie chose not to walk, was for Claire and Amanda to escort her up the side to her seat with her mom and dad. “We told Melmark that all we were hoping for beyond that were a few family photos,” said Donna Duffey. “Maybe she would
enjoy a half hour at the event? Maybe long enough for one dance?” Joe Duffey reflects on the magic of the day.

“Laura’s wedding was incredible! Maddie proudly held onto her brothers’ arms, and maturely and joyfully, walked down the aisle to her seat.” As the family moved outside to take photographs after the ceremony, Maddie stood in her pretty bridesmaid dress with her family, and then again with the rest of the bridal party. She was then introduced into the reception room holding her father’s hand, enjoying all the applause from family and friends. When the band started playing, she danced with both her sisters and her mom and dad. “We originally would have been happy if
she stayed for half an hour,” said Donna. “Instead, Maddie stayed for THREE hours!” After the wedding and reception, Maddie’s staff took her back to her house at Melmark.

Maddie’s parents say they are grateful for Melmark’s work in their daughter’s life and proud of their daughter. Donna Duffey calls Maddie “The Wedding Champ.” “We have always been so grateful for all Melmark has done for our family since Maddie first started as a student 14 years ago. This was an extra special gift.”•

Melmark is a comprehensive multi-service agency, providing evidence-based residential, educational vocational, clinical, healthcare and rehabilitative services for children and adults with autism, intellectual disabilities, brain injuries and other neurological and genetic diagnoses. With a focus on Applied Behavior Analysis (ABA), all services are personally designed for each individual in a safe environment of warmth, care and respect. Melmark’s varied programs in Berwyn, Pennsylvania and Andover, Massachusetts promote independence, increased self-awareness
and confidence while offering participant opportunities to make friends and develop personal interests. For more information, visit www.melmark.org